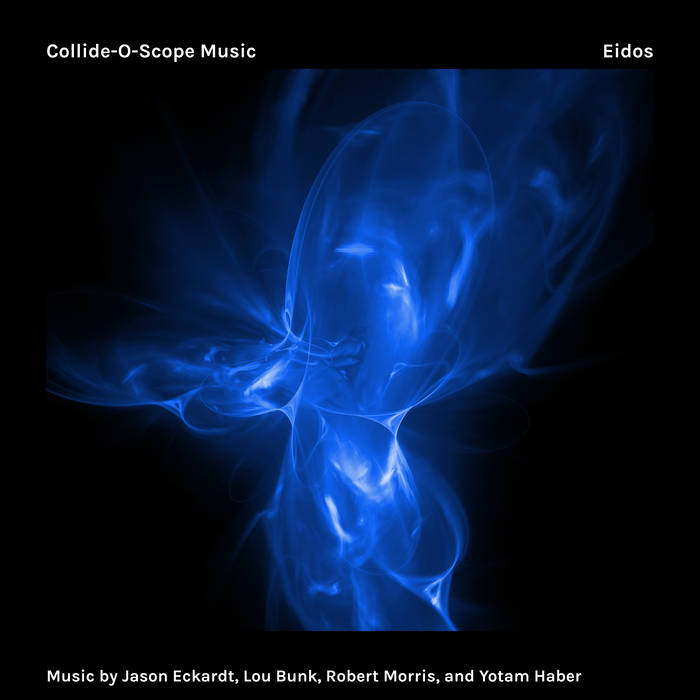 The six works contained on "Eidos" have been integral parts of Collide-O-Scope Music's programming repertoire over the past several years; four of the six, in fact, were composed for the group. "Eidos" is an ancient Greek term used by both Plato and Aristotle to denote "essence." It is an especially relevant concept for musical composition and particularly for the works on this album, as they all to some degree distill, transfigure, conjure, etc... conceptual, historical, and even directly musical essences in a variety of forms. Essences can be thought of, as it were, the raw magma of these works; whether it is Yotam Haber reaching back across time to conjure the ornamental and harmonic essences of Baroque composer Benedetto Marcello, who himself was recalling the virtual essences of even older musical forms, or Lou Bunk evoking the aesthetic contemplation of delicate fluctuations in shade during a snowstorm. Jason Eckardt's darkly provocative, ominous, and brutal "Rendition" bravely plants itself in the unbearably violent essences of piercing torture, while Robert Morris's "Sabi" crystallizes in musical form essential character foundations from Japanese haiku poetry. In the six works on this album, a brilliant diversity of essences both musical and extra-musical emerges.


Lou Bunk: A Shadow On The White (2014)
I wrote this composition thinking about the drama of subtle and abrupt contrast; listening to the hushed sound of my neighborhood during a heavy snowfall, against its noisy yet static appearance; comparing the uncertainty of memory, against the vivid emotion of recalling; staring at my plain off-white wall long enough to see past its visual banality to a chiaroscuro like beauty in the shadows on the white.

This composition is written for pianists Marilyn Nonken and Augustus Arnone.

Robert Morris: Foray (2016)
Foray was directly influenced by Augustus Arnone's pianism, which I finally heard in the spring of 2016 in a Collide-O-Scope concert featuring the music of Milton Babbitt and some younger composers. His remarkable ways of voicing and articulating piano sound made a big impression on me. So in mid-July of 2016 an idea for a piano piece popped into my head and the character of the piano ideas was something I thought Augustus would like to play, so I dedicated the piece to him. The basic idea of the piece is that an opening series of ten chords arranged in an arc (maybe a rainbow, since each chord is of a different harmonic “color”) each generate music in subsequent sections of the piece. Thus the form is the arc followed by ten sections in different registers and densities. As the music goes on, the derivation of the music from the chords gets progressively more complicated and obscure in the way the music is parsed, registered, and embellished. The process is from isolated objects to mixtures and blends—an entropic process.

Robert Morris: Sabi (1996)
"Sabi," is a Japanese aesthetic term for "loneliness," one of three characteristics of Haiku poetry (along with "wabi" (poverty) and "yügen" (mystery)). As Leonard Koren has written, wabi and sabi together "is a beauty of things imperfect, impermanent, and incomplete. It is a beauty of things modest and humble; it is a beauty of things unconventional." Wabi/Sabi captures the transient quality of this piano piece (autumn, 1996) and much of my recent music.

The piece is based on eight simultaneous unfolding, 55-note strings of pitches, quickly saturating the 88 notes of the piano. The unfolding happens four times, the middle two involving direct (if camouflaged) octaves. From time to time, the music relaxes as if to contemplate its progress or reflect on the moment.

Lou Bunk: Fortune (2015)
“Fortune” is a reconstruction of melodic material from Machaut’s Motet, “Ha Fortune”. Using six melodic fragments from Machaut, I create new textures and harmonies while blending in noise and microtones. The instruments are often working together to create a group sound. Though occasionally, and with little ambiguity, certain instruments are featured.

Three text phrases are borrowed from the Machaut, each being the first sung words in the three‐part original: “Ha! Fortune”, “Qui es promesses” (who trusts in the promises), “Et non est qui adjuvat” (and there is no one who helps). I decided to have the players sing this text at key moments, as its meaning inspired the emotional drive of the composition. Through the music, I explore the idea of being powerless over unexpected events, and how the beautiful can be destroyed by ugly and scary circumstance, and yet in the end, seemingly out of nowhere, good fortune may arise.

Jason Eckardt: Rendition (2006)
Beginning in the mid 1990s, the CIA instituted a program of extraordinary rendition, wherein foreign nationals suspected of terrorist activity were detained, without legal process, and then covertly transported to countries where regulations for interrogation were less stringent than those imposed the United States or completely absent. The program was dramatically escalated after the September 11 attacks and has been defended vigorously by the Bush administration. Former CIA agent Robert Baer describes renditions bleakly: "If you want a serious interrogation, you send a prisoner to Jordan. If you
want them to be tortured, you send them to Syria. If you want someone to disappear — never to see them again — you send them to Egypt."

The etymology of "extraordinary rendition" can perhaps be traced to the meaning of the verb rend: to tear, to remove from a place by violence, to wrest. Other meanings include to tear (the hair or clothing) as a sign of anger, grief, or despair, to lacerate with painful feelings, and to pierce with sound.

Estro Poetico-Armonico ii is a work that takes as its launching point the fifty psalm settings of Benedetto Marcello, a contemporary of Bach, who paraphrased or elaborated on the liturgical music of the Venetian Jewish community. I came across his music when I was living in Rome working on "Death Will Come And She Shall Have Your Eyes" (2008) for string orchestra, mezzo-soprano, and archival recordings of Roman cantors from the 1940s. I was inspired by the Jewish community of Rome and Venice that were segregated for so many generations since their initial arrival in Italy after the destruction of the second temple in Jerusalem. Without any real musicological proof, nor really requiring one for artistic license, I imagined that one generation passed on to another these ancient musical traditions, and through a kind of telephone-game-evolution, the music lost or gained its essence on each transference. When I came across the first edition of Marcello’s psalms, I read his introduction with great astonishment and pleasure: he, too, spoke of an imagined musical filament connecting the music sung in the Venetian synagogue of his day with an “ancient music sung passed down from Mount Sinai”. The theory, of course, can never be proved, nor should it be, in order to appreciate the beauty and brilliant inventiveness of his music. Estro Poetico-Armonico II is my re-imagining/re-hearing/re-creating in a very far-away, distant sense.

Bandcamp Daily  your guide to the world of Bandcamp

Featuring Gary Bartz, 5 years of Rhythm Section Intl and an LP of the week by Nicolas Jaar